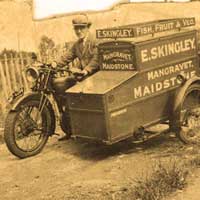 With such an unusual name, it would appear to be an easy task to link families together. This impression is reinforced by the limited coverage of parish records on the internet (that is, those pre-civil registration) which give the impression that there are fewer candidates than there actually are.

The main source of these registers is the IGI (International Genealogical Index) as transcribed by the LDS (Church of Latter Day Saints, otherwise known as the Mormons). The parish registers for Roxwell (where dozens of Skingley families can be found during the 18th and 19th centuries) are there, but those for Rawreth are not. Willingale Doe is there, but Writtle is not. And so on. This being the case, the temptation is to jump to conclusions - that's a Joseph Skingley born around the right time, it must be my ancestor - without realising that there are in fact several more possible candidates in surrounding villages.

Nor does it help that our ancestors were extraordinarily unimaginative about naming their offspring. I have, for example, records for no fewer than ten boys called Samuel Skingley baptised between 1782 and 1815. All these took place within a radius of a few miles of each other. Some share common ancestors, some not. Some died as infants, some not. Some were even baptised in the same month (there are two of them baptised in May 1790). Add to this the fact that many of these folks were very vague about their ages (variations between census returns of several years are common) and, without DNA testing or holding a seance, we have to accept sometimes that such certainty just isn't possible.

I've put together some information which I hope you'll find helpful. Click here to read my summary of the milestones that mark the different types of information available to you.

My own research has covered extensively (but not inexhaustibly) the county of Essex. I have generally tried to draw conclusions only when there is enough evidence cross-referred through civil records (where available), parish records and census returns, together with occasional fortunate discoveries such as resettlement papers, to "prove" my case. However, I'm the first to admit that even these best efforts can lead me astray, and that (certainly before the advent of civil records in 1837) there is no such thing as absolutely proof of ancestry - especially when the vast majority of these people were labourers, with no land, no money and no wills.