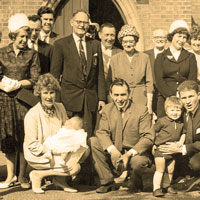 During my research, I've been lucky to meet many of the descendants of Jonathan, Richard and James, and the various "bonsai" trees.

NB: I do have lots of photographs of these gatherings, and I promise I'll put them back up shortly - in redesigning the site, I just haven't time to do it today!

August 1999 : a grand Skingley get-together, with 59 members of all branches of the clan

September 1999 : Patrick Skingley from the USA

September 2002 : The Maude Family from France

May 2005 : Marlene Gray from Australia

September 2006 : Georgie Thurber from the USA